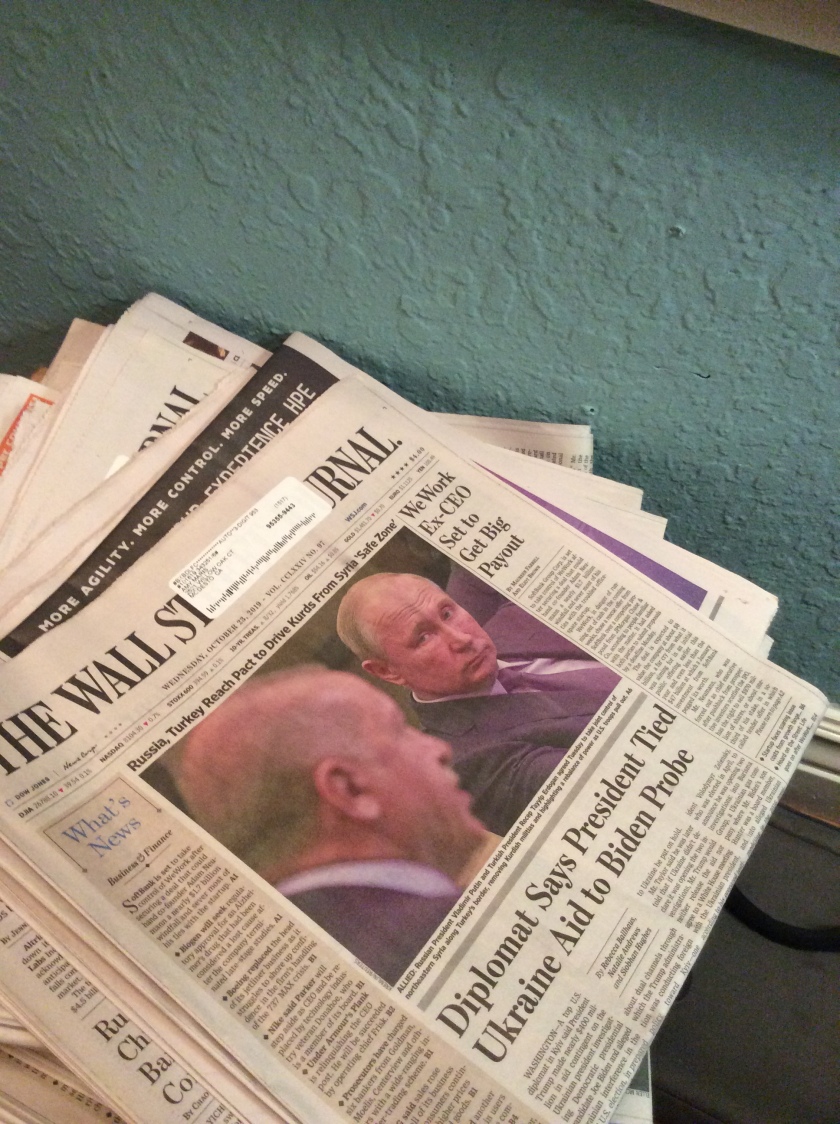 It began innocently enough. It was a brief encounter in a hotel room actually.

I say brief, although I took the copy home with me, read it over again, loathe to leave it.

I was drawn to the alluring articles on fashion, the conservative bent of the headlines and the opinion page, a refreshing relief, and the foodie-rich recipes that I clipped and saved.

I entertained the idea of more.

Furtively, I began searching for an online connection. That was the easy part.

Taking the next step, I rationalized how I needed the print copy. My windows were in sad need of washing. Only the old-fashioned way of washing them with newsprint would work. I discussed it with my husband, disguising my true motive, or so I hoped. I explained, “There’s this great deal-12 weeks for $12!” I purred. He concurred. The windows did need washing.

I touched the mouse, gave away my personal information, and viola! I was a regular subscriber!

The paper came in the morning, thrown casually onto my driveway like a secret missive from an exotic place! Wall Street in New York to Willow Oak Ct. California–coast to coast. I noticed with a slight sniff of superiority that the local paper on my neighbors’ driveways was a mere flyer compared to the healthy bulk of my paper.

Several mornings it was soaked through, a victim of my automatic sprinkler system. No matter. I dried it in the sun and read it later, a tad yellowed but still fresh news. For the first few weeks I read it every morning. Not every article, mind you. Just the ones I could vaguely understand. After all, I’m not an elite. But reading the WSJ made me feel like one. These were heady days. Reading the likes of Peggy Noonan and —-Hamilton made we feel as erudite as their writing.

And of course I tackled the crossword puzzles. That’s a subject best touched upon lightly. In full disclosure however, there was a helpful comment a knowing friend confided to me, “The ones at the beginning of the week are easier.” Well, I appreciated the encouragement but apparently I’m dumber at the beginning of the week too, because I’ve yet to complete one, although they stay around the house for weeks. I got in the habit of clipping out the answer key the next day, paper clipping it to the back of each puzzle for quick reference. That helped.

The papers began to stack up. I couldn’t bear to throw them away. Still, the windows were unwashed. Guilt led me to wash them eventually, but I only used the financials since I couldn’t wrap my head around them anyway, even with colorful charts. The front pages and weekend editions I hoarded like heirlooms. Someday they would be, right?! The affair proceeded nicely until one day we hit a snag.

There was a break-up at one point. It was WSJ who initiated it. The papers just stopped coming. I checked my calendar and sure enough, my 12 weeks were not up yet. I called customer service, rather disillusioned to find I had reached a call center in the Philippines. “We are sorry,” she said chirping a line of pre-scripted apology that rang a little shallow. My knight hadn’t fallen off the charger, but he sat slightly askew.

I accepted her apology and the paper came again a couple days later. I was indulgently forgiving. After all, it’s gone all the way from New York via information from the Philippines. I wish I could say it ended well.

In a final attempt to receive dry papers, I opted for another subscription at a higher price. Addictions are a beast. It comes now in my mailbox by 3 pm. That’s after I’ve received the highlights of the day on my Twitter feed. The box where I keep my old papers is overflowing.

Ah, Wall Street. You are now a wistful memory of a passionate fling.

I’m still working on the windows. At this rate I’ll have enough newsprint for life.