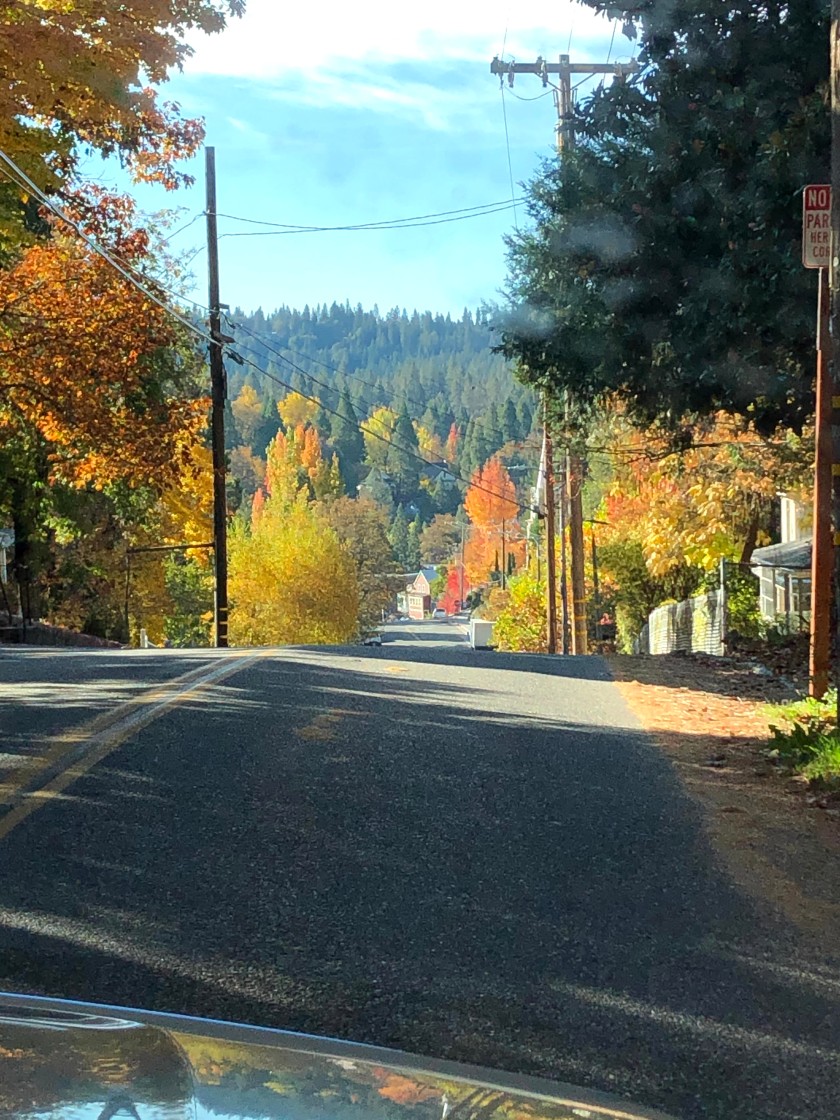 A weekend meander to Nevada City with my daughter was a feast plus some. 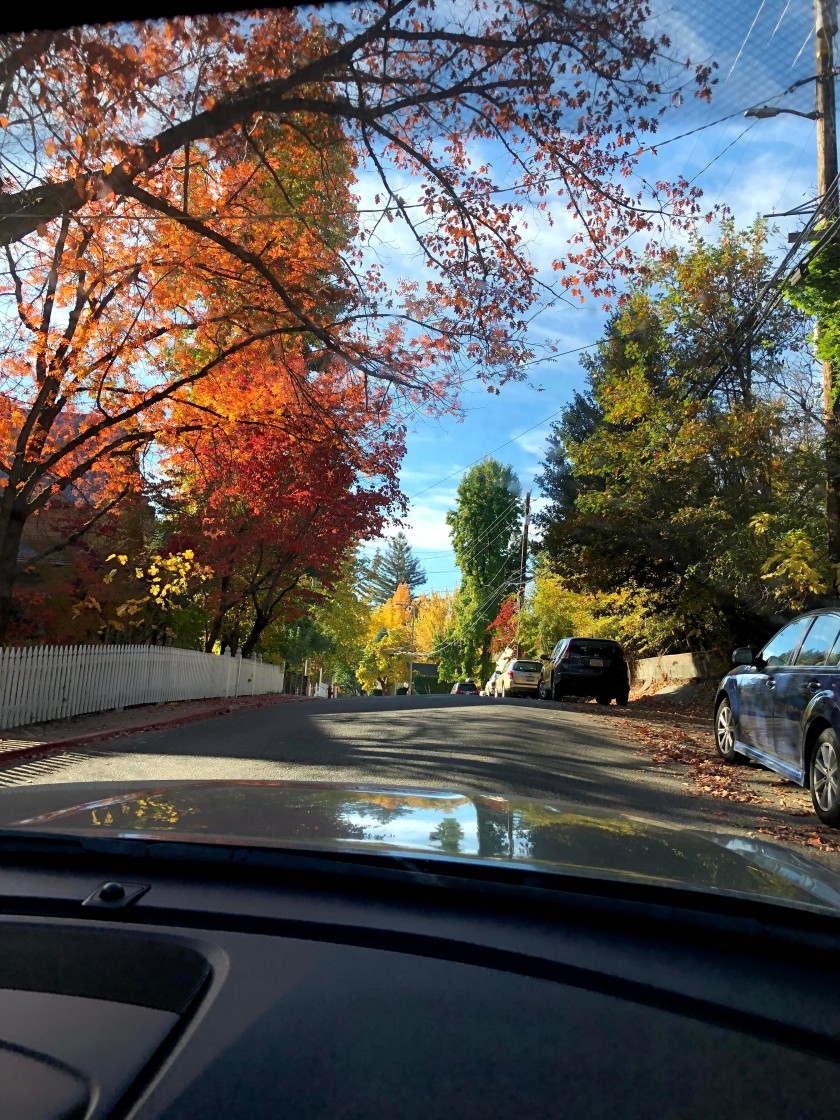 Living in central California, I’ve become easily satisfied with a mediocre show of autumn and that usually not until after Thanksgiving, and so I was pleasantly surprised to find the foothills ablaze with color!

This beautiful little town is a hidden gem, tucked away in rolling hills, surrounded by now-defunct gold mines, and chock full of surprises. 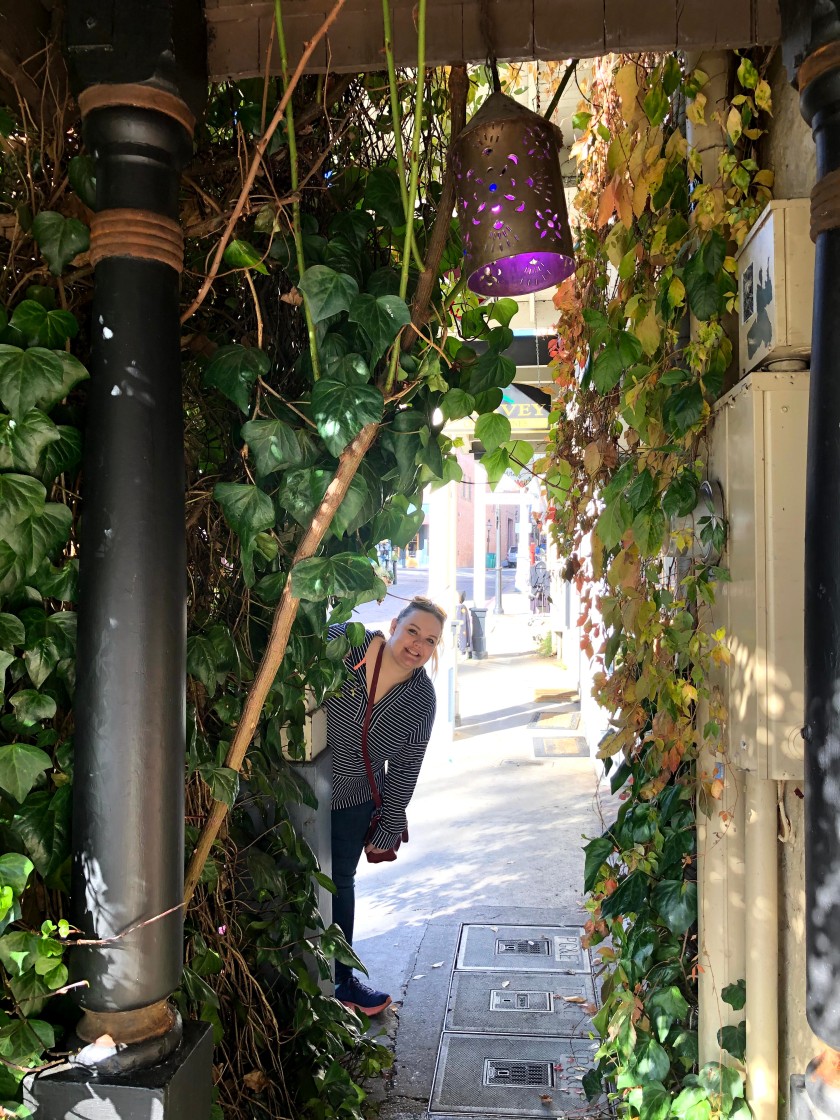 It tracks the story of a veteran who finds a welcoming new family in the small town; a tear-jerker for sure. The Methodist church at the top of Broad street is featured as the heart of the community.

We arrived at evening, disappointed to find the Nevada City Classic Cafe , also a featured scene in the movie, closed for the night. Here it is later the next day, open and busy!

But we made the best of it and ate at Lefty’s  overlooking the river. The pizza was delicious as was the view.

Cheerily telling all the locals that we had come because of the movie, we were met with mostly lukewarm enthusiasm. Of course that didn’t deter us one bit. We happily told a perfect stranger who was staying at our hotel and the next day he told us he watched it and loved it!! 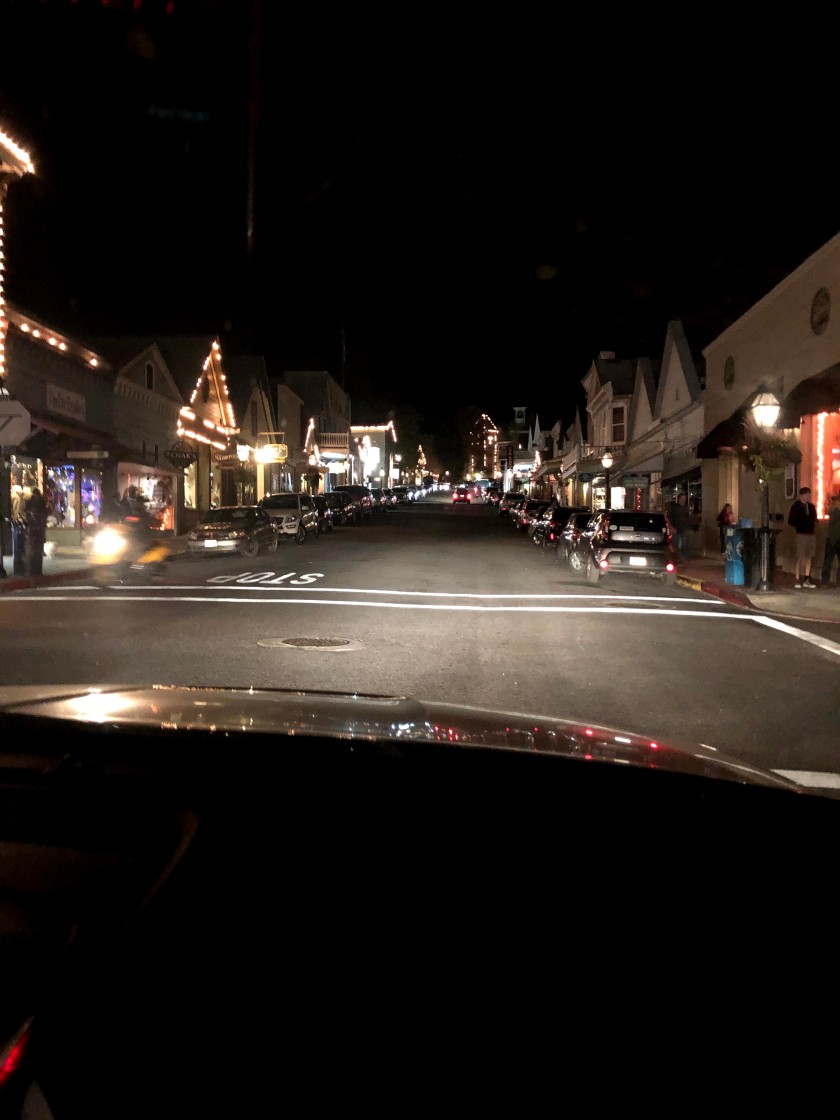 The town is hopping at night, but don’t expect to snag an uber or lyft. No cars were available. Ice Cream at the Chocolate Shop, run by a cute young coupla kids who were ‘hallmark quality wholesome’, was a must! Here it is in the daytime, the ‘balconies everywhere’ we’d read of in the literature stretching across the entire upper floor.

We walked back (in the spooky dark) to our little domicile at the Northern Queen Inn named after and built on an old railway that still operates a 30 minute excursion ride.

It is a perfectly acceptable, if not luxurious compound of 1990’s nod-to-victorian-style motel units, complete with a really good breakfast. The coffee and sausages were especially high-quality. 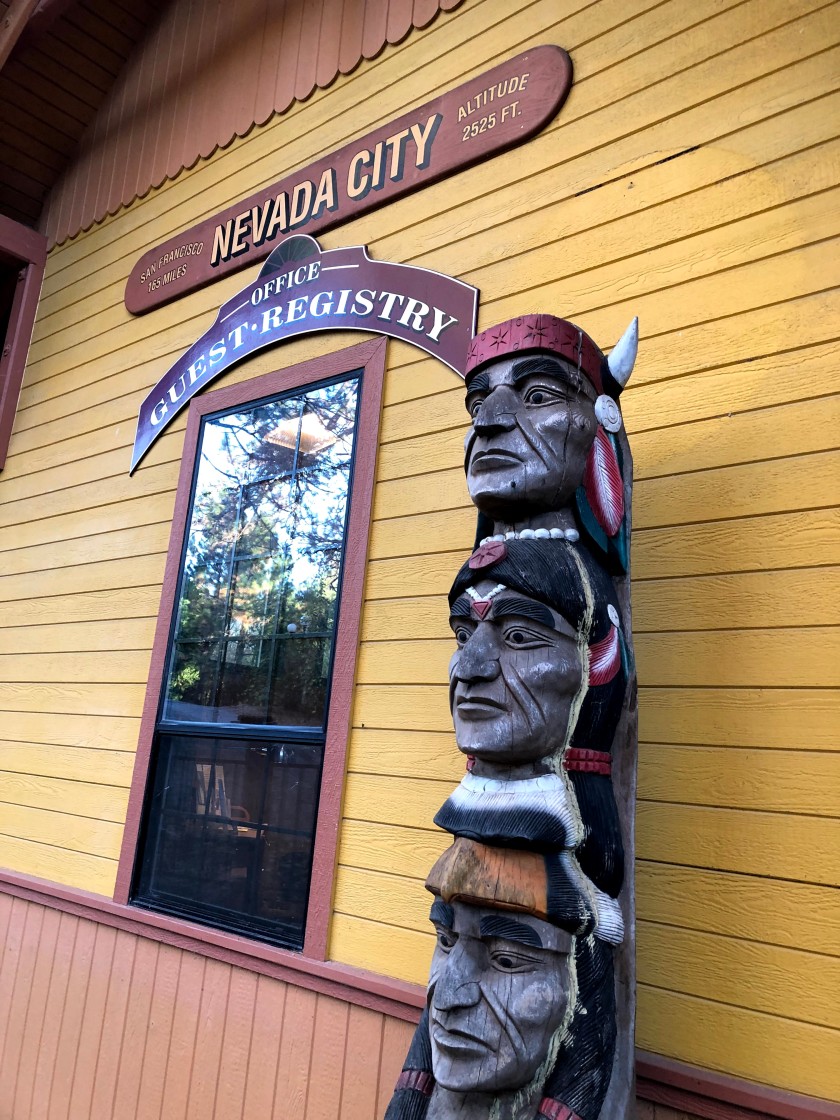 The setting is stunningly woodsy and quaint.

The breakfast room had been built around a couple trees, and our view overlooked a rushing little waterfall. 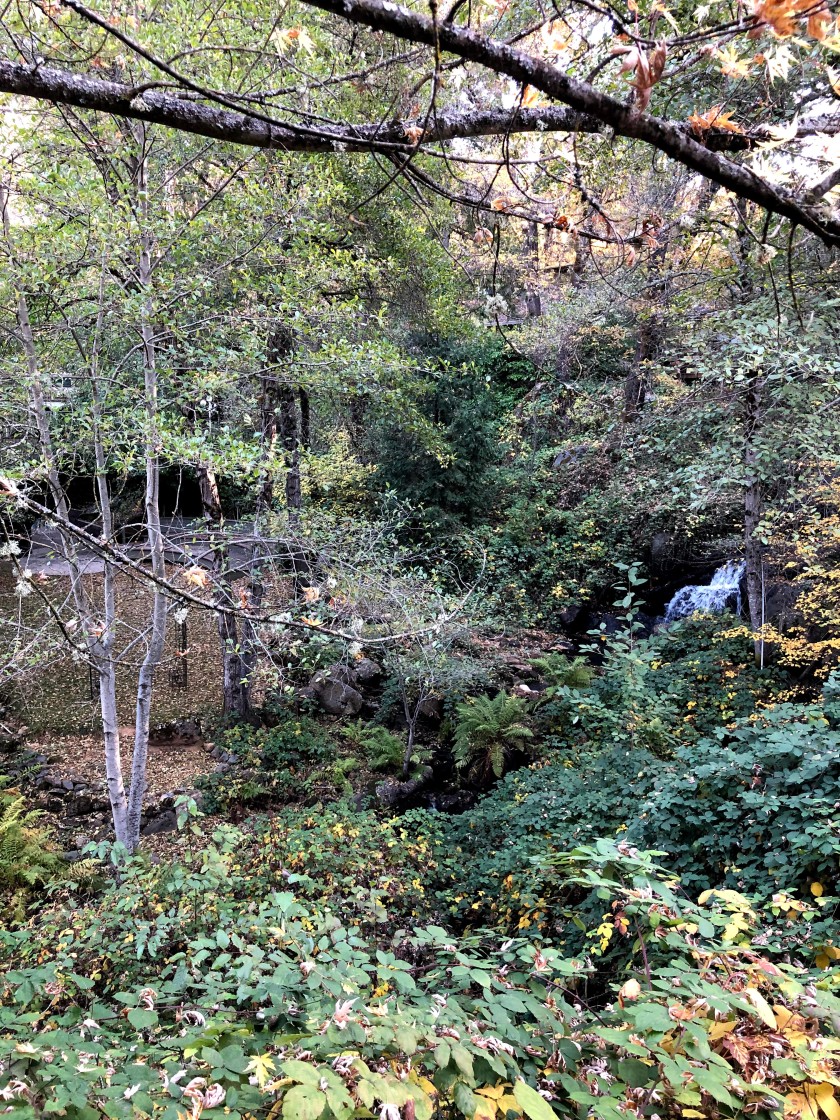 After breakfast, we took on the town with gusto, driving through the streets filled with older, I mean really older, historical homes clearly kept with pride. Halloween decorations were everywhere, and one local promised, ‘This isn’t all of it. There will be plenty more to come.”

We ducked into a treasure of a bookstore, Toadhall Bookshop, crammed from floor to ceiling with old and new books. I forced myself to look quick as I could have easily stayed all day and night, but due to limited time instead I promised myself I would ‘haste me back’ another day. 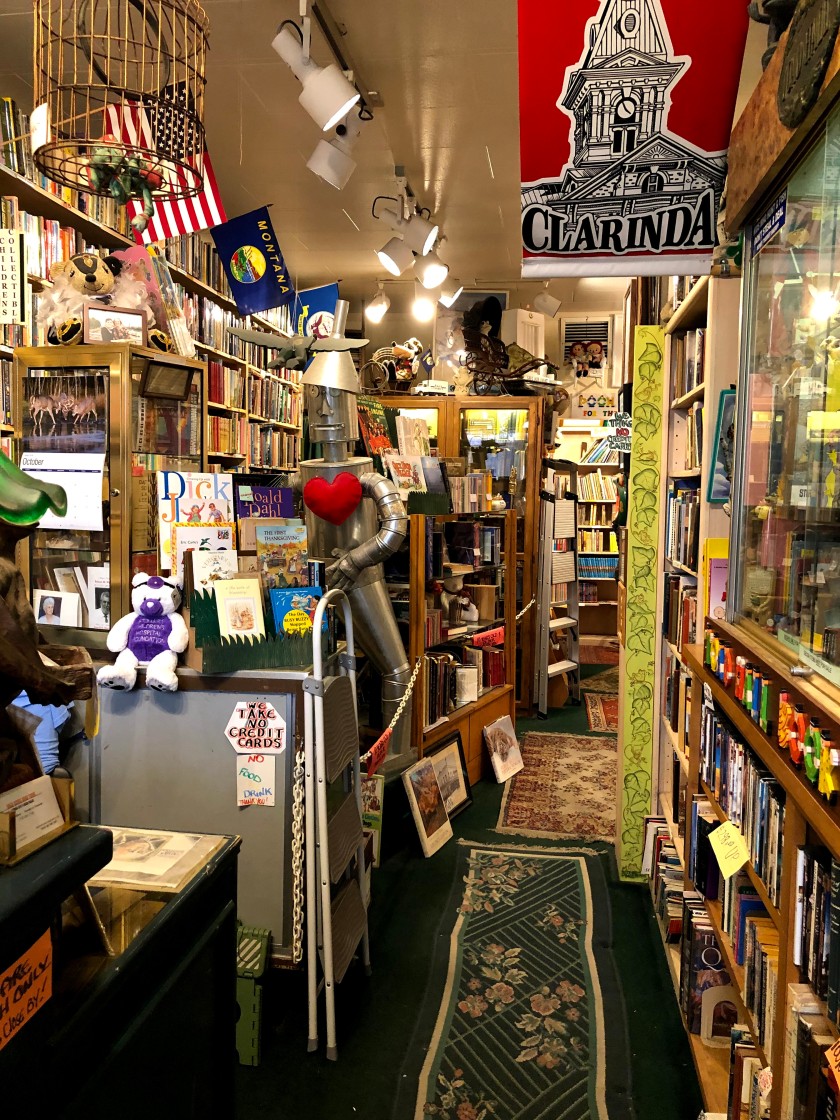 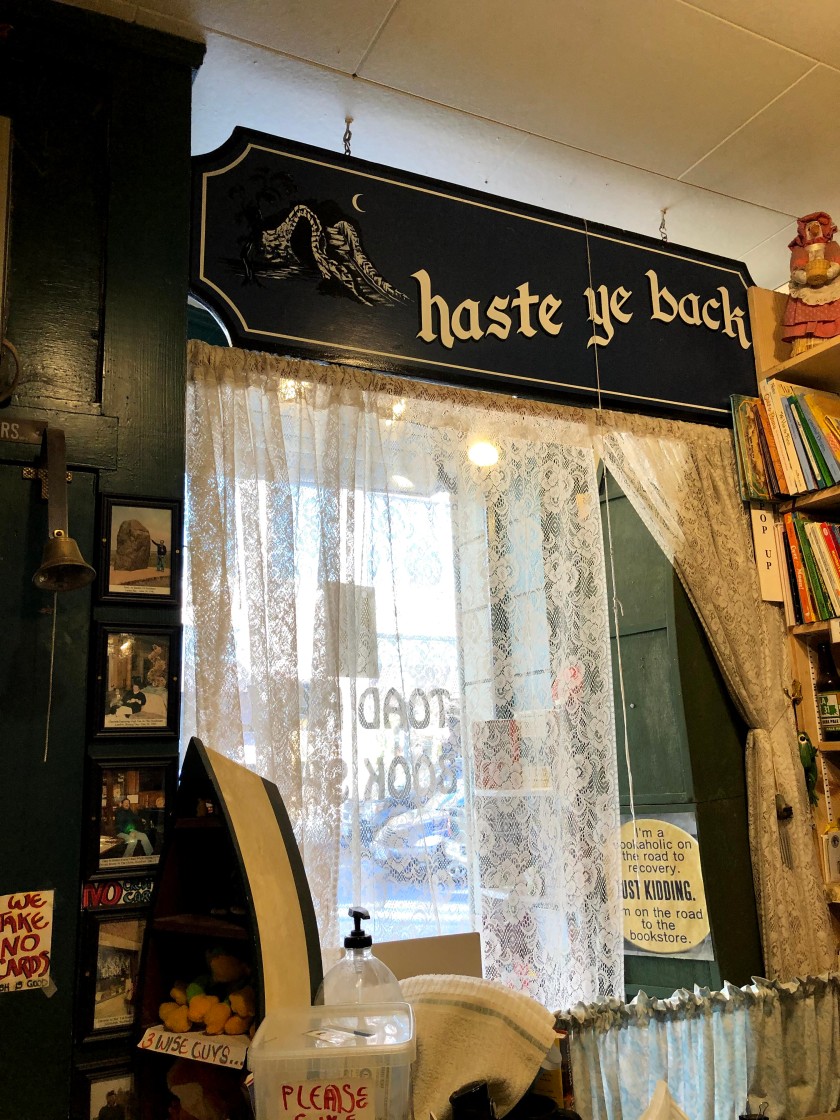 There was a farmer’s market on a side street. It was the finest display of fresh fruits and vegetables I think I’d ever seen! 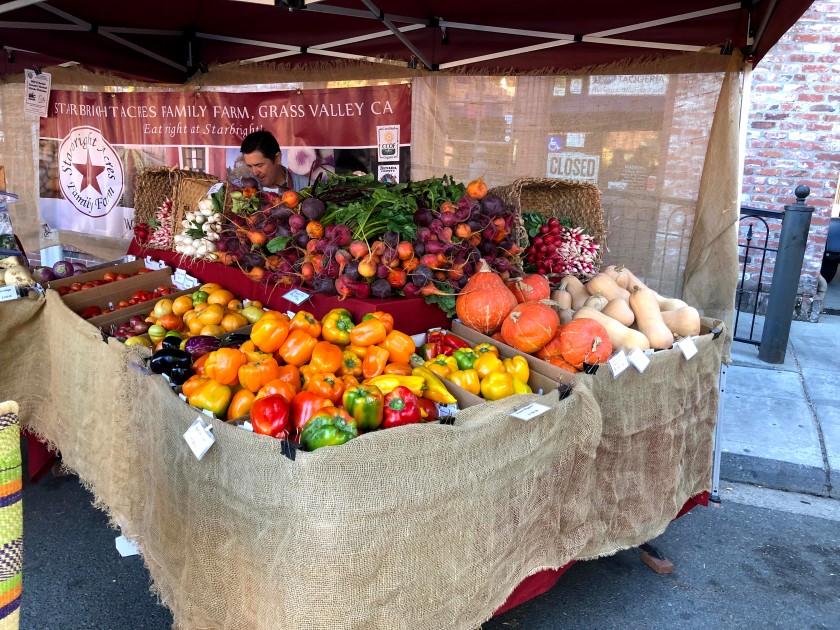 We wandered into the Crumbunny Coffee Roasters, (there were more amazing not-Starbucks coffee shops than in our hometown of Modesto – someone please take note) and were handed a free bag of freshly roasted beans by the proprietor Amalia. She related her story at my urging, as I’d everheard her say there’d been an accident several years back. Seems she’d flipped her car at 10 miles an hour in rural Texas when someone left a six-pack in the road. To hear the details it was a pretty miraculous recovery from brain damage when, among other things, the gear shift was stuck in her neck. Her story should be written, I told her. She said she had written it but not published. Someday I hope to read it in print. She’s a remarkable, warm, positive woman. The coffee was excellent, and it just happens to be the first legal small-batch coffee roaster in California.

Nevada City hosts the oldest operating Theater building in the state. Again, a treat for another day.

After ducking in a few more shops, we finally walked into the cafe where Cody (John Newton) meets Faith (Alice Evens) for the first time, for you movie fans who’ve seen it. Of course we ordered the   chicken club sandwich with curly fries.The menu featured this as the Christmas Card Special. Owner Mrs. Valentine said, “Ask me anything about the movie. I sat right over there, and my husband and son were in it!” she told me proudly.  The group at the table next to us hadn’t heard of the movie so we indoctrinated them too!

By then, the news around town was that a PG&E power outage was scheduled for 3pm that day. Most businesses were still open, doing business while they could. Some were ready with back-up generators, others grimly ready to shut down for the duration. “It’s nice, though,” one business owner said, “seeing everyone out walking around talking to each other,” speaking of previous outages. I thought their spirit grand in the face of it all. We were ready to drive back home after lunch. Sadly, later we learned the road we took into the city was closed due to fire evacuations.

It was a perfect little trip, taken just in time with someone I love, to stimulate my creative senses. Expect to see Nevada City’s charm wend its way into my writing in the future, and say a prayer for Northern California tonight. Rough times, but tougher people from the looks of it.